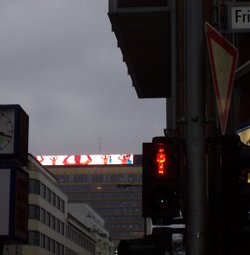 'Christ Is Not An Aryan' on top of Axel Spinger Building in Berlin, 2007 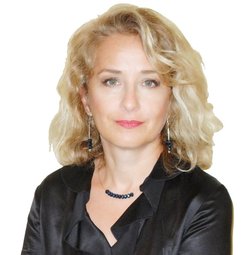 Graduating in engineering sciences, Alla Tkachuk (BSc MSc FRSA) has enjoyed a career in fine art. Her work has featured on the front pages of The Times (UK) and Bild (Germany), and in the Guardian, Independent, Jackdaw Art Review, Art Industry, Hello!, Der Spiegel, Die Welt, ITV, and other media platforms. She has exhibited worldwide. Her work is included in the art collections of the Royal College of Music and the BBC Public Ownership Collection. She is a recipient of the Leverhulme Artist-in-Residence Award, UK Millennium Award, and Gold Medal of the Lead Awards. Alla is an RSA Fellow. She is based in London, UK.

I began my art practices by exploring human identity in portraiture and curatorial work. Interested in the synergy of art and science, I experimented with transforming the production and consumption of representational art through digital technologies.

For the last decade, I have been inspired by the arts’ impact on creativity and social change. I discovered that experimenting through the arts produces particularly creative brains. I also discovered that art not only can express issues, it can deal with the issues directly, empowering people to change the world and reach for the common good.

Working from the conviction that art shapes creativity, creativity shapes innovation and innovation shapes the world, I wish to influence social change by enabling the creativity of younger generations through my social art project MASK Create.

This series of oil paintings, digital prints, wallpaper/textile design, and animation explores the historical figures of Hitler, Mussolini, Franco, Mao, and Stalin. The series was exhibited at Crone Gallery in Berlin in 2007 and featured in international press. The Times (UK) called 'Siamese Twins' as ‘The Image of the Week' in 2003. Saatchi Gallery named it the 'Critic's Choice' in 2007. 'Christ is Not an Aryan' animation was screened on top of the Axel Springer Building in Berlin in 2007 and dabbed as ‘one of three things to see in Berlin’ by Bild and BZ. Full figures of ‘The Dictators’ were published in Der Freund magazine (Germany) in 2005. Other works of the series featured in Berliner Morgenpost, Sleek fashion magazine, and Die Welt (Germany).

Following a sitting at Highgrove, Alla created a series of drawings and paintings of Prince Charles. The paintings featured on the cover of The Times (UK), Bild, and Der Freund. The 'Black Prince’ won the Gold Medal of the Lead Award for ‘Best Magazine Cover of the Year 2005'.

Alla curated her own seminar series on modern portraiture ‘The Changing Face of Portraiture’ at the National Portrait Gallery in London, debating how portraiture can escape the ‘shackles of convention’ with leading artists and critics such as Maggi Hambling and Tim Marlow. The Times (UK) was the series’ media partner. It wrote:

‘Alla Tkachuk believes that radical new concepts are needed in portraiture today. She would like to encourage 3D digital and installation portraiture, has invited a cosmetic surgeon to discuss his work “sculpt faces”, commissioned a “sound portrait” that uses computer software which translates image into music, and offered herself as a living portrait to grace the walls of the NPG. Tkachuk intends the choice of venue to be provocative. The NPG was established by the Victorians as a gallery about the history and status of the sitter rather than the quality of the portrait as art.’ (The Times, 13 June 2006.)

Alla's ‘Instigative Heads’ explored the transformation of production and consumption of representational art through modern 3D digital technologies. 'The ‘Heads’ are 3D scans of facial expressions (‘texture maps’), which were rendered as oil paintings, then 3D-digitally merged and moulded in space and time, and then 3D printed and projected using integrated electro-acoustic landscapes and augmented reality. The series was shown at the National Portrait Gallery as part of Alla's 'The Changing Face of Portraiture’ seminars in 2006; at the Shunt, London, in 2007 where viewers could interact with the 'Heads' through motion-sensing technology; and at the Balaklava Odyssey Media Art Festival in the Crimea in 2010.

Alla has written a column 'How to Look at Art' for the Kenyan newspaper The Star since 2014, and contributed to the blogs of the Royal Society of Arts (UK) and the Results for Development Institute (USA), and  magazines AD (UK), Childhood Education (USA), Private Sector (Kenya).

©Alla Tkachuk, 2022. All right reserved. No image or text may be reproduced without the artist’s written consent.